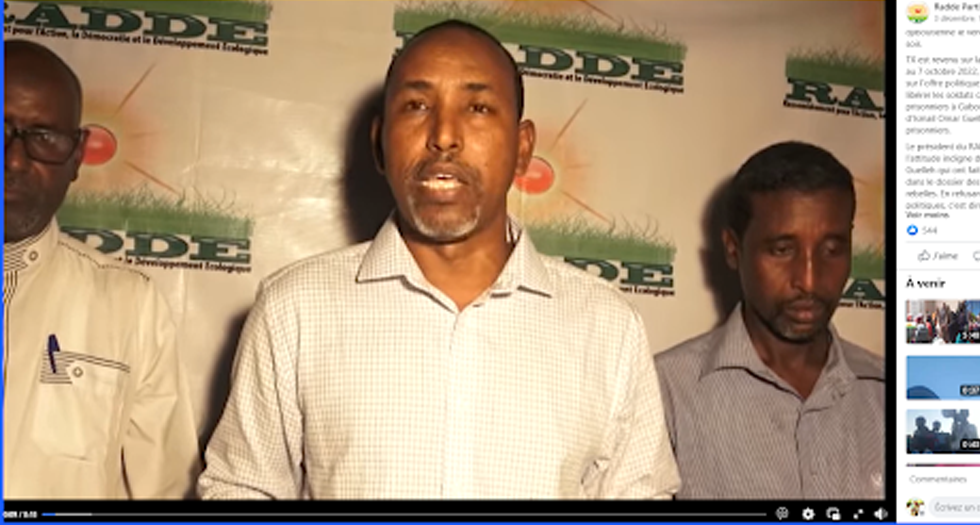 The RADDE Djiboutian opposition party denounces the Djiboutian regime’s refusal concerning the offer of the FRUD (POLITICAL ARMED GROUP). Here is their press release here is the video link https://www.facebook.com/radd.parti/videos/675660787550502

“We strongly denounce the uncompromising position of the Djiboutian regime refusing the release of detainees in Gabode and, therefore, the release of soldiers in the hands of FRUD-ARMÉ. We demand the release of people unjustly detained so that our soldiers call on their families”, said Abdourahman Mohamed Guelleh TX, a political opponent, the former mayor of the city of Djibouti, and president of RADDE.

He addressed the delegates of the invited neighborhoods at his home in the Djiboutian capital on December 2, 2022.

TX returned to the armed confrontation from October 6 to 7, 2022, to the reaction of RADDE, to the political offer of FRUD-ARMÉ ready to release the defeated soldiers in exchange for prisoners in Gabode, to the intransigence of Ismail Omar Guelleh on the issue of prisoners.

The president of RADDE forcefully denounced the unworthy attitude of the regime and of Ismail Omar Guelleh, who made a clear political choice in the case of the soldiers in the hands of the rebels. Refusing the release of political detainees takes the support that the release of soldiers is not of interest.

Ismail Omar Guelleh, by mandating a spokesperson to relay his response, missed an opportunity to be silent. His position, forwarded by the mandate of spokesperson, demonstrates the political amateurism of the man who has abused the Nation for forty-five years.

The former mayor called on the regime to draw inspiration from the exchange of prisoners observed in the war between Ukraine and Russia.”