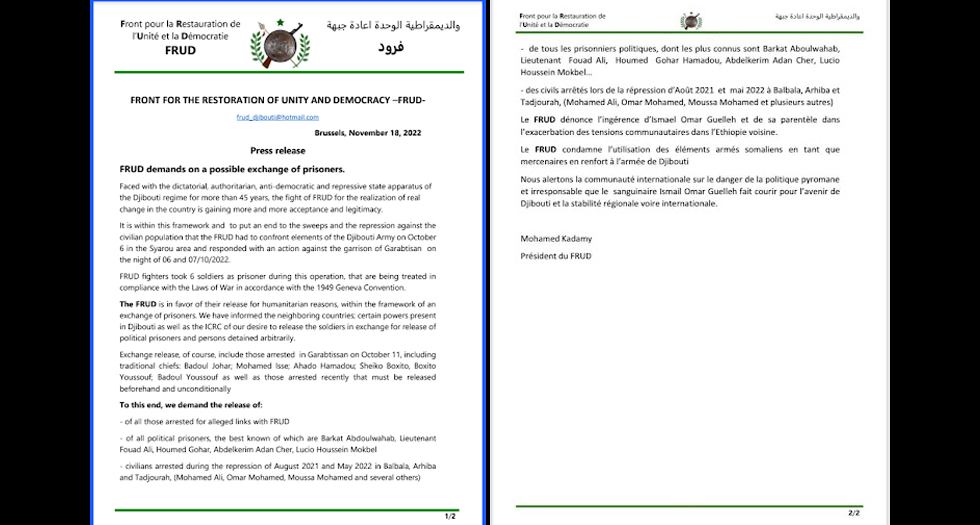 Below is the Press release translated,
FRUD demands a possible exchange of prisoners.

Faced with the authoritarian, anti-democratic, and dictatorial nature of the Djibouti regime, established for more than 45 years, and its recourse to permanent repression, the fight of FRUD for the advent of fundamental change in the country sees its legitimacy strengthened.

In this context and to end the search and repression against the civilian population, the FRUD had to confront elements of the Army on October 6 in the Syarou area and responded with an action against the garrison of Garabtisan on the night of 06 and 07/10/2022. FRUD fighters took six soldiers’ prisoners during this operation; they are being held in compliance with the Laws of War following the 1949 Geneva Convention.

The FRUD favors their release for humanitarian reasons within the framework of an exchange of prisoners. We have informed the neighboring countries, certain powers present in Djibouti, and the ICRC of our desire to release the soldiers in exchange for the release of political prisoners and people detained arbitrarily.

Of course, the release of those arrested in Garabtissan on October 11, including customary chiefs: Badoul Johar; Mohamed Issei; Ahado Hamadou; Sheiko Boxito, Boxito Youssouf; Badoul Youssouf, as well as those recently arrested, must be done beforehand and unconditionally

To this end, we demand the release of the following:

of all those arrested for alleged links with FRUD,

Front for the Restoration of Unity and Democracy

civilians arrested during the repression of August 2021 and May 2022 in Balboa, Arhiba, and Tadjourah (Mohamed Ali, Omar Mohamed, Moussa Mohamed, and several others)
FRUD denounces the interference of Ismael Omar Guelleh and his relatives in the exacerbation of community tensions in neighboring Ethiopia.

FRUD condemns the use of Somali armed elements as mercenaries to reinforce the Djibouti army
We alert the international community to the danger of the pyromaniac and irresponsible policy that the bloodthirsty Ismail Omar Guelleh is running for the future of Djibouti and regional and even global stability.